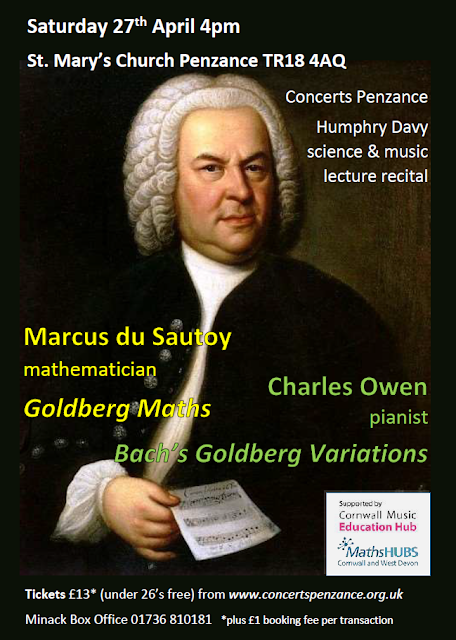 We are very pleased to announce the return visit to Concerts Penzance by mathematician Marcus du Sautoy and the first visit by pianist Charles Owen on April 27th.  Marcus explores the maths behind Bach's Goldberg Variations with musical examples, followed by a comlete performance of Bach's masterpiece.

And what about the music in the picture?  Here is a description from an article in the Guardian:

'In his right hand, Bach is offering us a complete compositional kit, a musical riddle that’s called “Canon triplex à 6 voc”, a six-voice perpetual canon, which loops back on itself, again and again. The riddle takes some solving, as Gardiner does in his book. To generate the six voices, you have to read the three parts in the clefs that Bach is presenting, but then you need to read backwards from his perspective in different clefs, and there is even a “double mirror canon” there too, “if we reflect the notes along the middle line of each stave”, as Gardiner says.
Bach wrote this canon as one of 14 that he transcribed on the back of his copy of the Goldberg Variations, Gardiner also tells us, and in his submission for admission to Mizler’s Society of Musical Sciences in 1747, the work was included along with the first Hausmann portrait (the musical riddle is in that picture too), as well as his Canonic Variations on “Von Himmel hoch”. Bach became the 14th member of Mizler’s society, and those 14s are significant: if you add up the letters of B-a-c-h numerologically, you get 14 (2+1+3+8), a numerological quirk that Bach was fond of, especially since if you add up J-S-B-a-c-h, you get 41, which is of course 14 backwards.'
Posted by Concerts Penzance at 12:56 am