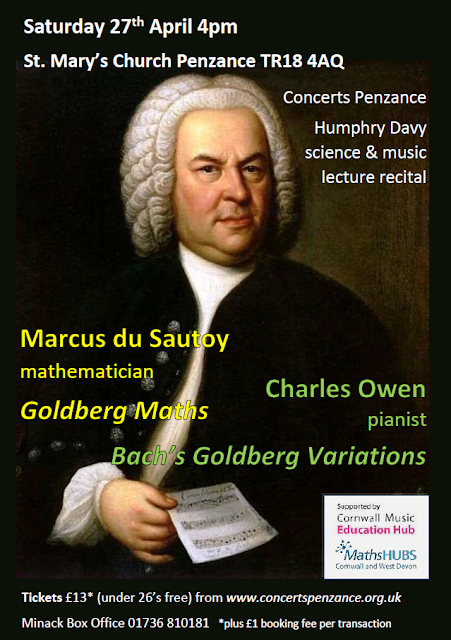 
Marcus du Sautoy is the Charles Simonyi Professor for the Public Understanding of Science at Oxford University.  His articles on all things mathematical appear in the Times, Telegraph, Independent and Guardian newspapers and he has presented many popular radio and television programmes exploring maths and science.  Marcus's exploration of maths in music has included collaborations with the Royal Opera House exploring Mozart's Marriage of Figaro, with the Swedish Radio Symphony Orchestra, and many people in Cornwall will remember his previous visit to Penzance exploring the maths of Messiaen's Quartet for the End of Time.

Charles Owen is one of the finest pianists of his generation.  He appears regularly at London's Wigmore Hall and Kings Place and internationally he has performed at the Lincoln Center and Carnegie Hall in New York, the Brahms Saal in Vienna’s Musikverein, the Paris Musée d’Orsay, and the Moscow Conservatoire.  His numerous CDs include solo recordings
of piano music by JS Bach, Brahms, Janácek, Poulenc and Fauré, as well as many chamber music recordings.

Book now while tickets are still available!
Posted by Concerts Penzance at 10:29 pm