If there were musical Olympics with awards offered to the most brilliant, versatile, adventurous and diverse musicians in the world, cellist Matthew Barley would likely be a contender for gold in all categories.  One of the finest cellists of his generation, Matthew has appeared as soloist with top orchestras and in recital in many great concert halls around the world, but he is equally comfortable making music with Indian, Sufi, African, and Jazz musicians or London’s Grime MCs, and his musical passions include improvisation and new music along side education. 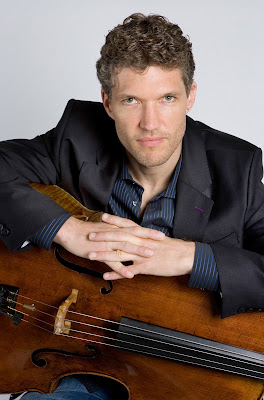 Matthew Barley visits Concerts Penzance at St. John’s Hall on Friday March 22nd as he travels Around Britten exploring the legacy of British composer Benjamin Britten whose centenary takes place this year.  With 100 performances and education workshops across the length and breadth of Britain, Mathew plays in a staggering array of venues, including large and small concert halls, cathedrals and churches, houses and barns, pubs, a cave and even on a lighthouse.

Always one to look at the world of music from unusual angles, Matthew’s programme in Penzance sets Britten’s writing for solo cello amongst a diverse  mix of contemporary cello music by composers working in  Britain in the years since Britten’s death, including Dai Fujikura, John Tavener, James MacMillan, Colin Matthews and Gavin Bryars.  The programme also includes improvisations around a remix of the Fujikura score by Norwegian DJ Jan Bang.

The concert opens at 7pm with new music for 21 players inspired by Britten’s suites for solo cello, written over the preceding four days by Matthew Barley and Music Scholars from Humphry Davy School – the first big collaboration project of Matthew’s Around Britten tour.

“Matthew Barley’s name is synonymous with the joyful dismantling of musical boundaries, but even for such a master of the unexpected the whole concept of this Britten tour is wonderfully eccentric.” said Tim Boulton, Director of Concerts Penzance.  “I’m absolutely delighted that Matthew is not just visiting Penzance for a single concert but staying for nearly a week to share his gifts with young musicians from Humphry Davy School – I’m very excited to hear the outcome of this collaboration.”


Posted by Concerts Penzance at 4:28 pm