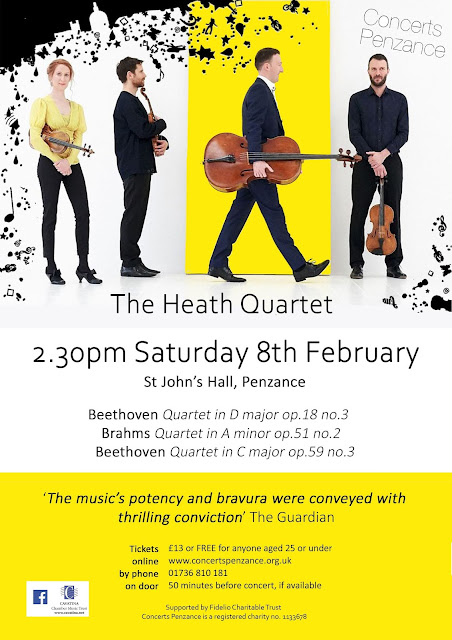 The dynamic and charismatic Heath Quartet first visited Concerts Penzance as young ‘rising stars’ but a decade later the quartet have earned a reputation as one of the most exciting British chamber ensembles today with regular performances at leading venues across Europe and North America.
Recent performances have included many at the Wigmore Hall, a complete Beethoven Cycle at Kilkenny Festival, a John Tavener premiere at the BBC Proms, concerts at the Beethovenfest Bonn, Mecklenburgh-Vorpommern Festival, the Concertgebouw Amsterdam, Musée d’Orsay and Louvre Auditorium in Paris, Carnegie Hall and Lincoln Centre in New York as well as concerts in Chicago, Los Angeles and Toronto.
Their recording of Tippett’s string quartets won the 2016 Gramophone Chamber Disk of the Year. Later recordings of Tchaikovsky Quartets and the complete Quartets by Bartók have received outstanding reviews.